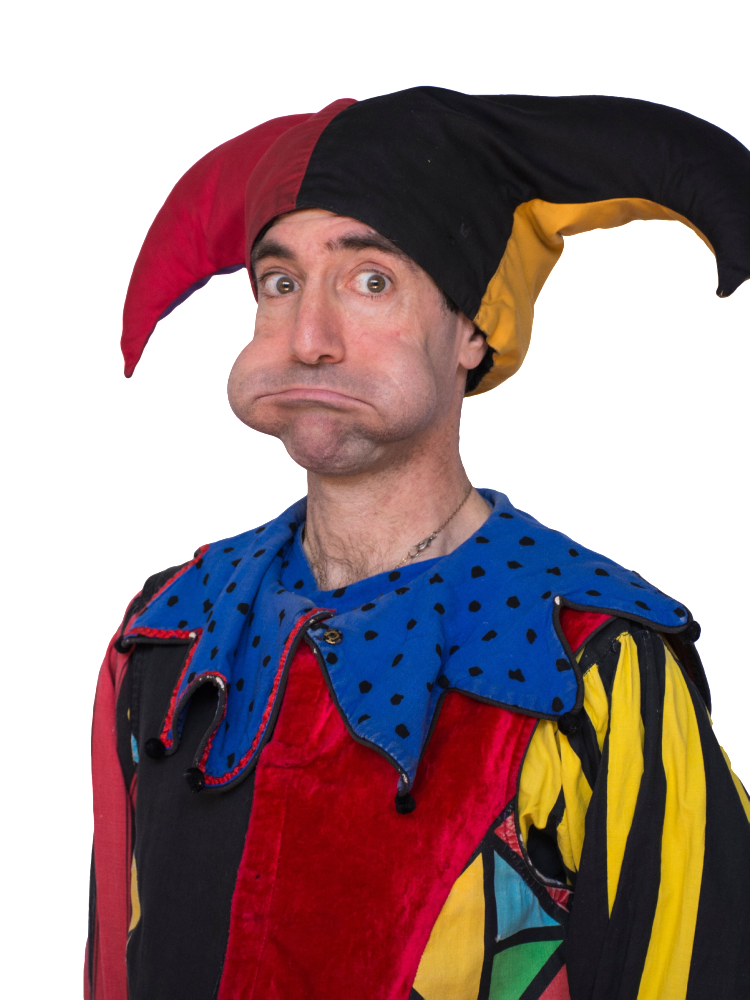 “He can make the stiffest of stiffs laugh” –Boston Magazine

While most comedy engages the language center of our brain, Alex’s visual humor, sight gags, and light-hearted music bypasses the head altogether and goes straight to the heart.

Alex’s interest at connecting beyond words started as an eleven year old collector of National Geographic magazines.  With his earnings as a paperboy, he bought back issues at 10¢ apiece. He was fascinated with the stories of exotic cultures in far-off lands. He started college as an anthropology major, but when he saw how few laughs that got, he dropped out.  Besides, money was tight at home, and he desired to pursue something more practical: stage clowning. For months, he worked the Alaskan canneries, which paid generous overtime, and eventually saved enough for the professional training program at The Dell Arte School of Mime and Comedy.

It was here that he was introduced to the magic of communicating without words. But while he learned mime and circus skills there, don’t expect a painted white face who has taken a vow of silence. In fact, he’s an expert at using all the dynamics and richness of human voice. He doesn’t just use words that you’ve heard before.

He speaks Grammelot, which involves gibberish and made-up sounds.

Feldman’s love of music, comedy, cirque, magic and a touch of mischief ultimately gave birth to the impish rascal that audiences worldwide have come to know and love as Alex the Jester.

While most humor  is enjoyed by a specific region and works for a certain group or demographic, Alex is entranced with finding the similarity between cultures. He is obsessed with exploring that sliver of humor that is funny to both the young and young at-heart. Everyone can relate to the heartbreak of feeling unloved, the pride of doing the impossible or the red face you get from an epic fail. He is a magician at conveying emotion through his face and body and sharing what we all have in common. The U.S. State Department recognized the cultural significance of his work, and sponsored a goodwill tour of Russia, including theaters in Moscow and orphanages in Siberia. Public Radio International described Alex the Jester as a cultural ambassador.

In addition, a host of theaters as far north as Siberia and as far South as New Zealand have presented his one man show.

The persona that Feldman has brought to life through Alex the Jester is one that combines the costuming and skills of Cirque du Soleil with a brand of humor that is seldom found elsewhere. He not only entertains with his hilarious routines — he  inspires the audience to express themselves, and is ready to improvise with them at the drop of his floppy hat. They are co-creators. They know that, together, they’ve contributed to a show that will never be quite duplicated. With this shared accomplishment, many leave the performance walking on air and feeling closer to those around them. And some forget where they put their keys!

Alex Feldman grew up loving National Geographic, and longed to connect with the peoples that filled its pages. How could you bring a smile to anyone, regardless of age or native tongue? His training at the Dell Arte School of Physical Theater helped prepare him for performing without language. But it took years of full time performing before he hit upon the that Eureka moment, and devoted himself to being a jester. it combined his love of comedy, music, mischief and cirque. Nearly all cultures love this impish rascal, who boldly acts ridiculous, challenges convention, and who’s unbridled imagination takes us to another world.

Sneak a peek of Alex off stage testing boundaries everywhere

He performs clean comedy. It’s perfectly fine if young people are present. In fact, theaters often book him as a means of developing the audiences of tomorrow. But make no mistake- this is no kiddie show! The costuming and skills evoke cirque du soleil, with an extra dose of laughter. Most notable, Alex takes the audience on a journey. They enter the world of the wise fool, where crazy sounding gibberish makes perfect sense. They laugh at that rare sliver of humor that is understood around the world. They get involved at his interactive humor, and by the end of the show, everyone feels a little bit closer to one another.

Alexander showed how brilliant foolery can be!

The Item, Victoria, BC

There is a wacky brilliance to Alex the Jester.  Anything can happen when he takes the stage.

Alexander’s appeal knows no borders. He instantly charms people, and it’s amazing how they loosen up, and play along.